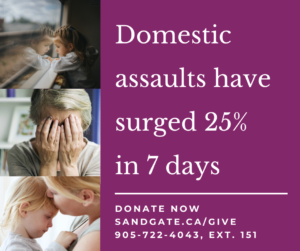 Domestic assaults have surged 25% in 7 days

Where We Came From And Where We’re Headed

On January 31, 1991, Ellen Sands was brutally murdered by her estranged husband. Ellen was 39 years old and a mother of three.

In the span of 18 months prior to her death, two other women had also been killed by their partners. All took place in Georgina, a town of only 10,000 people.

Ellen’s murder prompted an outpouring of support for action to end violence against women in the community. A group of concerned citizens formed the Committee Against Domestic Abuse (CADA) with the support of the Georgina Community Resource Centre.

The committee’s goal was to establish an emergency shelter for women in Georgina. The committee worked for more than a year and encountered numerous challenges before they found approval, funding and a suitable location for the shelter.

On June 1, 1992, Sandgate Women’s Shelter opened its doors for the first time. The shelter, purchased with funds from the Canadian Mortgage and Housing Corporation, was named after Ellen Sands and Westgate Lodge, the original building where the shelter was first located.

Sandgate opened as a 10-bed emergency shelter for women and their children fleeing abusive situations and offered a 24-hour crisis line.

Since 1992, Sandgate has grown significantly and has undergone numerous transformations, including:

By far the most significant transformation of the organization has been the development of the agency into a leader in the community as a feminist, anti-violence, and anti-oppression organization.

Today, Sandgate Women’s Shelter of York Region is an equity-seeking organization that strives to meet the needs of all women in an inclusive and respectful manner.